Doing Our Part in Building a House for an American Hero

Last Saturday night was our second and last hockey happy hour at the Front Page in Arlington in support of our Build A House Project. The turn out was great! We had lots of people there ready to cheer the Capitals on to victory and see if they won lunch with Nick Backstrom and Marcus Johansson. I had received several calls that day about people wanting to get last minute tickets and support the cause!

At the event, we had several people come up and just donate to the cause. We even had one Marine, currently serving, come to our table to learn more about the cause and donate some money. He was very touched by what we are doing as he has done two tours in Afghanistan himself. That moment was very humbling for me and made me feel like all of the hard work we have been putting into this cause is really worth while, not only for the Pearl family, but for our military community as well.

As the Capitals game got underway, Marcus Johansson was the first to get a tally. We must have been good luck for him! During the first intermission we raffled off our first set of prizes, including a few gift certificates and a few pairs of tickets to the March 8 Washington Capitals game.  Sky Kerstein, reporter for 106.7 the FAN, donated his time that night to call out the raffle winners for us! After the first raffle, we drew some more people over to our table to donate and throw their names in the bowl for a chance to win some signed jerseys or lunch with Nick and MoJo.

During the second period, the Capitals continued to battle hard, as we continued to battle towards our goal of raising $5,000! By the time we announced the winners of the second round of raffles, we were at almost $3,000! One of ProSol’s employees, Steve Bowles, won a Brooks Laich signed jersey! The other jerseys that were raffled off were Mike Green and Nick Backstrom.

There was an exciting last few minutes of the game, where the Capitals held on to their victory, their first win in three games! Just goes to show that there is good luck in doing good! It was time to raffle off the grand prize! The winner of the lunch with Nick Backstrom was Bill Haase, the father of one of our volunteers Lindsay Haase! It was a great night for all involved, the Capitals won, Lindsay, Suzy, and I all had a great time putting on the event and the Front Page was a great host!

Thank you to all that participatied in the raffle and came to our happy hours. And a big thank you to Sky Kerstein for being our MC, Jorge Fernandez for letting us use the Front Page and providing us with some awesome raffle prizes, and to Nick Backstrom for so graciously offering his time to help support our event! We could not do what we do without support from people like you! Our final total was $3,521! 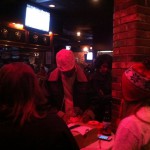 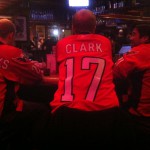