Endurance (also referred to as “ultra”) cycling is an activity that is sure to test the physical, emotional, and mental limits of all who accept the challenge.  At its essence, ultra cycling is akin to a war composed of several battles.  For endurance cyclists, those battles pit mind vs matter…mind vs weather….mind vs terrain….mind vs traffic….and mind vs self.  In other words, it’s a mind game.

There is a certain vulnerability about endurance riding.  It places each participant at the outer fringes of their personal envelope in a region that can be perilously close to the line that separates pain from injury, fatigue from exhaustion, and a ride home in your own vehicle vice an ambulance.

Ultra cycling requires preparation, strict commitment to personal management of nutrition and water, and a keen ability to put the brain in idle.  So you may be asking yourself, “why do it”?  In many ways, it symbolizes the physical and mental challenges that cancer patients encounter in their long battle against the disease and because of that I believe it represents that best way to honor (and raise money for) the victims of breast cancer. 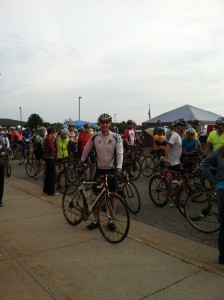 Going into this year’s N24HC, I was only able to accumulate 2,800 miles of training.  In addition, executing a few long training rides of more than 12 hours (essential to be properly trained for an ultra cycling event) again proved elusive due to other life commitments.

Weather was much more seasonal in Michigan this year as we set off at 8 AM sharp at 65 degrees.  The entire route consists of an AM loop (117 miles), PM loop (24 miles) and a night loop (8 miles).  The objective is to ride as many miles as possible within the 24 hour limit.  The AM loop is ridden once, the PM loop is ridden as many times as possible until night fall, then the night loop is ridden the rest of the race.  Wearing a long sleeved shirt worked well for the AM loop as the temp never climbed about 72 degrees.  The initial pace was extremely fast in the lead group to be riding for 24 hours; the first 100 miles were clocked at 4:50 running time.  I finished the AM Loop in just under 6 hours with about 6 riders ahead of me.

The first 12 hours of the race were not without some complications.  To my dismay, I developed saddle sores during the AM loop that plagued me the rest of the ride. I also developed some bad leg cramping despite the low temperatures, which was surprising.  After finishing the first PM loop, I became nauseous.  I later realized that due to the quick pace, I had not eaten enough food and was paying for it with a bad gut.  It is not a pleasant experience to force yourself to gag down a bunch of Bloc energy cubes when you don’t feel well, but after a while the nausea subsided.  I was way ahead of last year’s pace by the 2nd PM loop, which served as a source of extra motivation so I sorta climbed out of the hole I’d dug.  I decided to switch bikes after the 2nd PM loop because it had the aerobars mounted on it, making it easier to deal with the wind and gave me a chance to swap shoes.

I ended up riding 2 more PM loops (4 in all as opposed to 3 last year) before beginning the night loop.  As night fell, I was starting to get into a sustainable groove that put me on pace to exceed 350 miles (the goal) and probably reach 365 miles.  After completing 8 night loops I noticed some lightening off in the distance that was associated with a little rain.  Took a peak at the radar on a quick break and realized a thunderstorm the size of Lake Michigan was quickly approaching.  Instead of getting caught in the middle of the storm I decided to wait it out in the tent with Lisa and Kate, who were enjoying watching movies and drinking sangria.  About 10 min later, the storm hit hard and the race was stopped for almost 4 hours.

We rode out most of the storm in the tent.  When the leaking got to be too much, we relocated into the school with most of the other riders.  Imagine about 300 soaking wet and tired riders laying everywhere (hallways, cafeteria, etc) trying to catch a breather…..it was a sight…..not to mention the smell.  I decided at that point that waiting around to see if the race was going to restart was not going to be fair to my road crew.  The storm was still raging at this point with no end in sight.  As it turned out, the race resumed close to 5:00 AM in the rain.

I ended up placing 30th at 280 miles, having ridden just under 16 hours.  I don’t regret the decision to end the race 6 ½ hours early, but am hopeful that next year we will have more favorable weather and I can reach my goal. 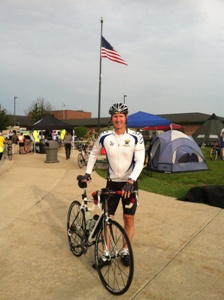 Going into the Total 200 race I was pretty confident about my conditioning.  Both the AF Crystal ride and the N24HC had gone well and I felt strong in the training leading up to the Total 200.  One aspect of the training that I had not encountered, however, was riding long hours in high heat/humidity.  True to form, the heat and humidity cranked up just prior to the race.

Although I knew better, I went out too fast and stayed with the top 6 riders for 80 miles.  At some point I dropped back on a hill climb and tried to close the gap at the top, which is when I hit the wall and had to slow it down to better pace myself.  In cycling language this is called “bonking”, signaling your day of racing is over and you’re in it now just to finish. It is a helpless feeling to bonk and most times you are forced to ride the rest of the miles alone because you simply can’t keep up with anyone who passes you and don’t want to slow down and ride with anyone you pass….which is what happened to me.  The heart rate had stayed too high for too long (165-172 for several hours) in 97+ heat and humidity and it took a toll.

Strangely, my feet also hurt pretty bad starting around 100 miles.  This was a distraction I hadn’t encountered and hadn’t planned for.  I believe the inserts I’d put in my new racing shoes caused the problem.  Note to self – trash  the inserts.

It turned out to be a very long day in the saddle as I rode nearly 100 miles alone after bonking out at 80 miles.  Sensing I was nearing the “line”, I called it a day at 175 miles and phoned Lisa for a ride home.  Pushing it further may have resulted in some bad consequences.  As it was, it seemingly took 48 hours to clear the cob webs from this one.

Having ridden this ride for 4 years, I have found it to be the most challenging test of endurance, primarily because of the heat and humidity.  Another aspect not lost on my legs was the fact that despite the impression that eastern Maryland is mostly flat terrain, there was over 9,000 feet of climbing, which added to the thrill.  The greatest lesson learned on this ride is one that I have learned before:  No matter how in shape you think you are, respect the heat and humidity and ride at a sustainable pace.

In summary, the challenges encountered while participating in these two ultra cycling events will no doubt leave an impression on my approach to preparations and race execution….specifically in heat/humidity.  Upon reflection, I had the option to drop out of the Total 200 to avoid crossing my own personal line.  Those undergoing cancer treatment, however, do not have that luxury to just “drop out of the race” and fight another day.  They are fully committed to the race and just like the heat/humidity; they encounter their own personal challenges along the way.  It is a good feeling to be able to bring a small measure of comfort for those that can’t just “drop out of the race” to help them to the finish line.  Thank you for participating with me in raising money for breast cancer treatment.  Your donations (all of them) will help some women reach their own finish line.